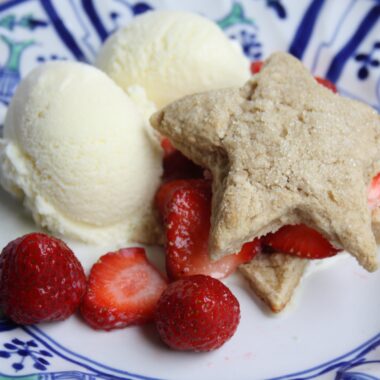 The best whole wheat biscuits Our family recipe for biscuits was passed down from my great grandmother but how far back it really goes we don’t know. It’s one of those recipes that has just always been around. Mom said her mom wasn’t one to make homemade bread but […]

Sunday mornings are deliciously quiet in our house. We’re still up early but never need to be anywhere so have the luxury to lounge with the paper, wander in the garden in our PJ’s and play board games with the kids. Sunday is my cinnamon bun morning because I don’t need […]

Orange blueberry cheese bread on a visit to Maine

Orange blueberry cheese bread – extra tasty when toasted. One summer years ago my mom, dad and a few of my siblings were traveling in Maine, on their way to pick me up at a friend’s cottage.  They left home a little later than expected and by suppertime were only […]

The eye can trick the taste buds – sometimes people think these are cheddar scones. For years this was my signature scone. I’d go for months making a batch every weekend and I’d even get up early on work days to make them for breakfast (before I had children that […]