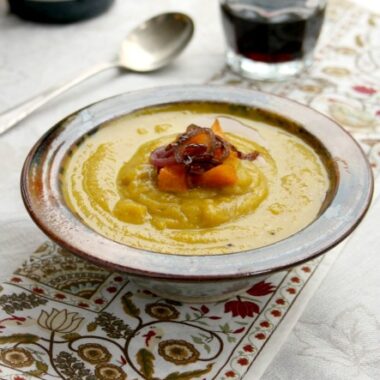 Curried Squash and Cauliflower Soup is a very creamy cream-less soup. November marks the beginning of soup season in our house. When the weather turns and the days get shorter there are few meals more comforting than a hearty bowl of soup. And I can’t think of a better way […] 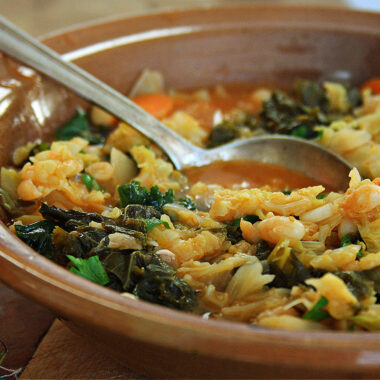 Winter squash and roasted red pepper lentil soup is smooth, flavourful and substantial, just right for damp winter days. What do you do when your kids announce they’re sick of soup?  From October to March I’d be happy to eat soup every day. It’s warming and satisfying, nourishing and a […]

﻿﻿﻿﻿Vegan Chocolate Cake is deliciously dense and moist with a fudgy frosting.The fall after my parents were married, dad and a couple of his friends planned a hunting trip to a camp way back in the woods near Westfield N.B. They were to be gone three days and since none […]

Warmly spiced Moroccan chickpea stew makes a satisfying meatless meal.Eating less meat is one of the best things that you can do for the environment. Going meatless, even one day a week is (environmentally speaking) like taking your car off the road for a few months. Want to save the […]