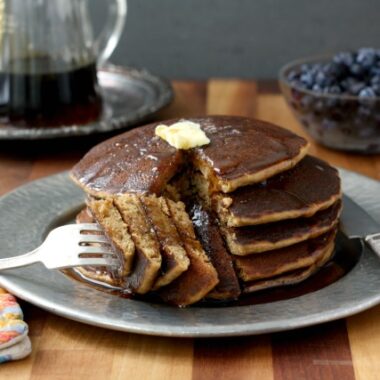 The Best Buckwheat Pancakes Recipe Ever

You’ll believe me when I say this is the best buckwheat pancake recipe on earth. But first…I had heard stories about this sort of thing happening…The mother of all annoyances that can grate on you like a tap dripping through the night: teens standing in front of a full fridge, […]

Did you know that buckwheat is grown in New Brunswick? We get so accustomed to our food being from faraway places that it’s easy to forget so much food can be, and is, grown locally.The BBC food website has a list of 25 foods you should try at least once. […]

This chocolate whole wheat zucchini bread could pass for chocolate cake, it’s that moist and extra chocolaty. It isn’t too sweet and just one loaf has a full cup and a half of zucchini. My twin brother and I recently celebrated an almost-milestone birthday.Twins aren’t that uncommon these days but […]

Wholegrain Lemon Blueberry Scones are wholesome made with stone ground flour and a full cup and a half of blueberries.The other night an acquaintance was telling me how, years back, she and her husband had a friend who baked scones every Sunday morning as an open invitation for friends to […]

Whole wheat banana flax muffins are a wholesome afterschool snack. When I was growing up, late spring was almost magical. Those afternoons that felt like summer days made us anxious to get swimming and with the longer days we’d play outside until we were called in for bed. This was […]