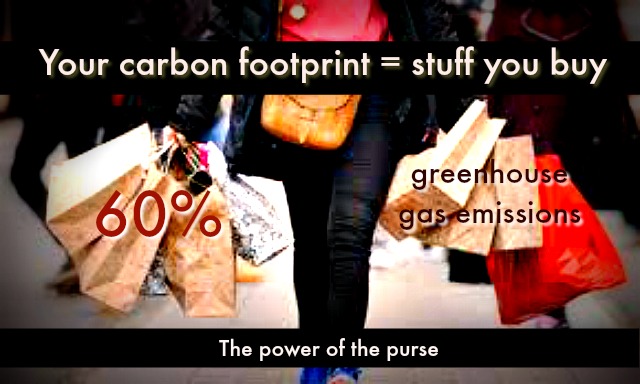 The power to reduce greenhouse gas emissions lies in our wallets

Have you ever wondered what impact your household could possibly have on global warming?  I’m sure I’m not the only one who has felt powerless in the face of rising greenhouse gas emissions when you know that huge countries like China have carbon emissions that are through the roof.

A new study out of Norwegian University aims to change that. Using a database that helped researchers determine the environmental impact of more than 200 product sectors, and then mapping consumer consumption of those products, the study was able to allocate CO2 emissions and other environmental impacts to the consumers who use them.
It’s a per capita view of emissions, are calculated according to the stuff we buy, including our groceries. And it shows how consumer spending impacts greenhouse gas emissions.
Consumers are responsible for more than 60 per cent of the globe’s greenhouse gas emissions.

On a global scale, we have much more environmental impact than you might think. Overall, consumers are responsible for more than 60 per cent of the globe’s greenhouse gas emissions, and up to 80 per cent of the world’s water use.

A per capita view of greenhouse gas emissions:

Individuals can make a difference:

The redrawing of the global emissions map makes it very clear that individuals really can make a difference.  Only 20 per cent of our greenhouse gas emissions are from the fuel we use to run our cars and heat our homes, the rest is stuff and because consumers have a great deal of control over household consumption, the power to reduce our carbon footprint is in our hands.

According to the report’s authors, two quick hits to reduce our individual carbon footprints are to reduce your consumption of meat and cut back on what you buy, from processed foods to manufactured goods. It’s the whole “reduce-reuse-recycle-repair” approach.
The more you think before you buy, the easier it will be to reduce your individual carbon footprint.
According to research, the millennial generation is on its way to reducing per capita CO2-equivalent emissions, since statistically this younger generation values experiences over stuff, and smaller over larger, more so than previous generations. But, as my husband says, the millennial way is a mindset more than an age bracket and for all of us, the power to change lies in our wallets.
Twitter Facebook Pinterest Print