You might cook with them every day but they’re never the star of the meal. They add body, texture and flavour but are often invisible in a dish.

That is, unless you caramelize your onions. Then they can become a versatile suppertime star in pizza and pasta dishes (see recipes below).

When I lived in France Pizza au Onion was a pretty common sight on restaurant menus. It sounded disarmingly simple, like something was missing from the description but when it arrived at the table you realized that there can be perfection in simplicity. No need to crowd the flavours when caramelized onions are involved.

Look for local onions in the grocery store all year long. Bags of yellow cooking onions grown in your part of the country are likely easy to find in the produce section. Check the tags to be sure.
To caramelize onions, slice them thinly and sauté in oil over medium heat for 20 to 30 minutes. Stir often.

(makes three thin crust pizzas)
This is a slight adaptation of a recipe from a friend that can also be used to make an Italian loaf.

Caramelize 3-4 onions. When they’re ready, stir in 2 cups chopped spinach or Swiss chard, toss around a bit, cover and remove from heat.

Cook one pound of pasta according to package directions and drain, leaving it a bit wet. Toss pasta with caramelized onion mixture, ½ cup of feta and ¼ cup toasted pine nuts or walnuts. Add a generous squeeze of lemon (about half a lemon) and season with salt & pepper. Serve with parmesan. Lemon zest grated over is a nice addition. 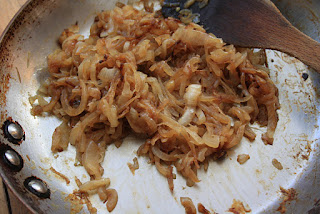 Food for thought!
Money doesn't grow on trees, and apples do